donniewr said:
Does it mean that 3.19 will not release next month? or we will get 3.20 instead
Click to expand...

V3.19 won't happen as the release will use the version V3.20 for its release versioning and it will be the last release in V3 series.

So far so good with 3.20 beta-1. I'll document any errors here with logs

I'm sorry to revert my previous announcement. There won't be support for PHP 8 for Chevereto V3 and support will be guaranteed only up to PHP 7.4 (PHP 7 eol, November 2022).

Does removed show "Powered by Chevereto" Footer link? I am really missing this option.

Nirjonadda said:
Does removed show "Powered by Chevereto" Footer link? I am really missing this option.
Click to expand...

The footer link to Chevereto as been deprecated. The only visible reference for Chevereto in this version is at /settings/powered

All the error messages will now include an ID that will be used to enable to hide the contents of the actual errors and reference those only by ID. This is to prevent any leakage of information that may be contained in a trace error when doing debug or anything related.

By doing this, end user will see something like this:

Which will be able to debug it on the browser console. Here's how it looks like:

With this all the errors can be hidden, and we can provide a way in which users can provide just the errorId to caught our attention.

Chevereto Staff
Administrator
In v3.18 the watermark sizing changed from area based to just width/height relative sizing, causing issues on the generated watermarks. I've reverted back these changes and fixed the thing to use again watermark sizing based on the applicable porcentual area.

Chevereto Staff
Administrator
A new beta will be published from this point, this beta will be v3.20.beta.2 and it is encouraged that all beta testers try this upcoming release. For those asking for access to V3.20, that will be enabled once the release gets to the stable channel which should be within this month.

I haven't updated on work in progress as I was mostly working on the service provisioning for V3.20 plus all the usual bug killing spree. Beta looks solid and I will release another beta within this week.

Release V3.20 will be available to general public by the very end of the month.

As I mentioned in the very first post, this release brings official support for Chevereto under Docker! and the images are already available: https://hub.docker.com/r/chevereto/chevereto

From now on I will officially provide the Docker images for Chevereto + service provisioning under Apache HTTP Server with mod_php and another one with a generic PHP-FPM that you can expose under any server as Nginx, Caddy, etc. I'm adding all these as a core element of the software's architecture this also gets support from me. 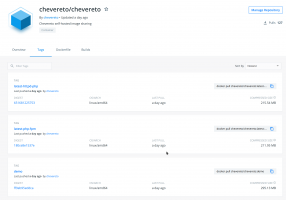 The docker images are automatically build on Docker's infra and sourced from the chevereto/docker repo. The images are versioned, latest targets the main branch latest-httpd-php, latest-php-fpm and named ones (as 3.20-httpd-php, 3.20-php-fpm) targets explicit versions. All new releases will get its own docker tag.

The Dockerimages define the service provisioning for PHP and all the system packages required for Chevereto. It also provides an app/settings.php file entirely based on environment variables, same for the php.ini limitations. 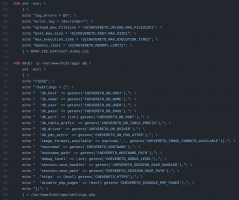 On first container run, it installs Chevereto (paid edition requires to pass the key as env variable) in the ephemeral container filesystem, it does this just once so you can stop the container and then it will just spawn the services (apache or php-fpm): 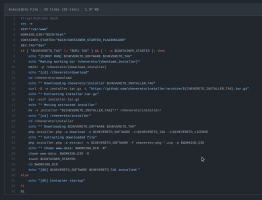 As you may notice the bootstrap script pass variables for everything, this allows me to use a generic tag-based provisioning.

The Chevereto demo is now available under Docker, here the instructions: https://v3-docs.chevereto.com/get-started/demo.html

This is similar to the other images, but this one includes a layer with sample importing data so when it runs it already contains files at /importing which allowed me to create a one-click demo with dummy data. This allows anyone to spin a demo to see how Chevereto works, you only need docker.

Feel free to try it out! I need to test it and I hope you enjoy it!

Chevereto Staff
Administrator
This will enable to decouple the user generated assets (logos, avatar, background) from the application filesystem. This will enable you to run Chevereto in more cloud providers, like heroku, netlify and many more.

Chevereto Staff
Administrator
Dear all, latest beta (v3.20.0.beta.3) has been just published, kindly test it and let me know what you think about it. Feel free to use Tech support / bug sections to report your findings.

The big addon on this beta is the support for external storage for asset storing, I will document that shortly so you can use that. You can spin a quick demo (even for the beta!) using https://v3-docs.chevereto.com/get-started/demo.html simply paste your license key.