Any image bigger than 17MB with resolution large enough throw internal server error because of a bug in imagemagick decoder code of chevereto. I might be wrong.

Why I say specifically 17MB?
Because I tested upload with an increment of 1MB images. even 16.8MB image was uploaded without error.
I could replicate it on demo as well. 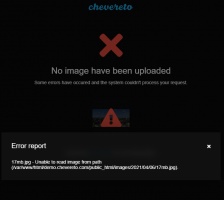 To be fair, I think it is related to resolution than actual image size. I am not sure.
It is weekday, so I couldn't check the codes. Even if I did I am sure I will be drowned in over information.

You can try your own images as well. Anything larger than 17MB with unusual resolution.

I tested it on stable release. All images I tested were successfully updated. So, this bug is present on beta.

Chevereto Staff
Administrator
License owner
This has been narrow down to a ImageMagick local limitation.